Thinking into the abyss. 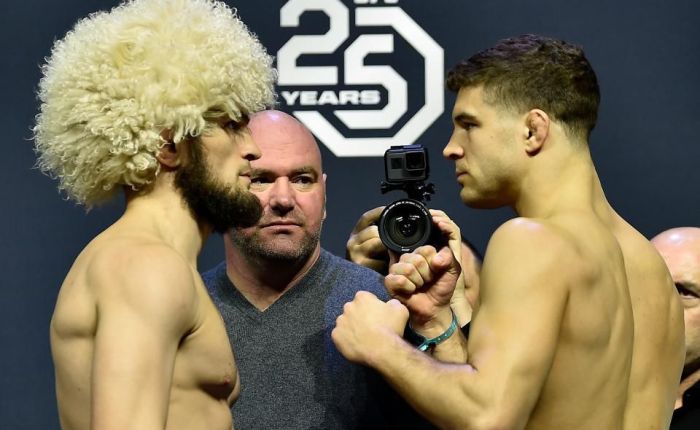 I don’t know where to start.

It was all going so well just 10 days ago…

Quick timeline since then:

And there you have it.  This once all-time card has been completely nerfed by several factors, mostly stemming from Tony Ferguson’s need to be a total dink and wear glasses in doors.  I honestly blame this all on him. 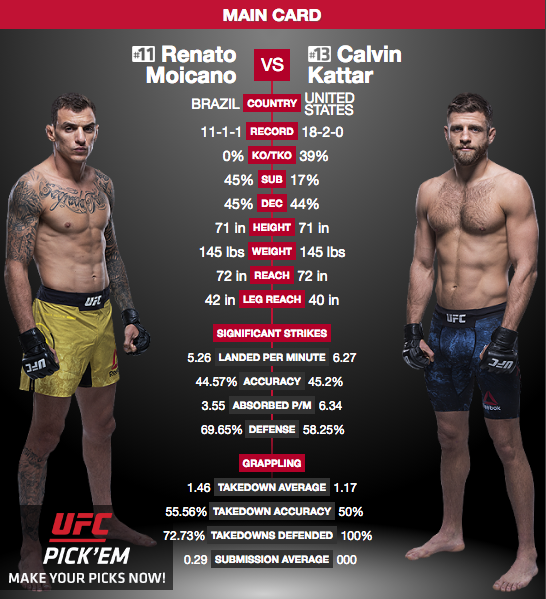 Sleeper fight of the night. I’m willing to bet most people haven’t heard much about either fighter, but I have followed Calvin Kattar due to his local ties (from and fighting out of Methuen MA).  Kattar has won both of his only 2 fights in the UFC.  In both fights he was a sizeable underdog, and in both fights he completely dominated with a combination of great timing, accuracy and pace.

On the other hand, Moicano is coming off a shocking last minute loss to Brian Ortega.  In that fight Moicano had controlled most of the action in the 2nd and 3rd round but got caught by a guillotine choke after a half-hearted takedown attempt.  Moicano is certainly dangerous and looking to get back on track.

This is a tough fight to predict because I’m not sure we have seen enough Calvin Kattar to know what he is going to do on a consistent basis, and we have seen Moicano stand toe-to-toe with Jeremy Stephens and walk away victorious. With that said, I’m going with the local kid.  If he can stay consistent and put together another fight like his most recent one against Shane Burgos then I think he outlasts the power of Moicano and picks him apart.

With all the action surrounding the main event and everything happening with Conor McGregor, this fight has become an afterthought, and that’s borderline criminal.  This is a huge HUGE fight, and will cement someone’s legacy for better or worse.  There is no question that Rose soundly defeated Joanna to win the belt in their last fight, but there is question about whether or not she can do it twice.

In her time as champ Joanna defended the belt ferociously and looked mostly unstoppable. Joanna talked the talk and walked the walk.  When it came time to fight Rose her confidence and bravado were at an all-time high.  She was definitely drinking her own kool-aid.  Joanna went on to get KO’d by Rose and that put an end to all the noise.

This fight will either prove Thug Rose as a formidable champion, or put Joanna back in the driver’s seat of the division after a quick bump in the road.  I am more inclined to think it will be the latter, but would not be surprised either way.  I’m expecting this to easily take Fight of the Night bonus. 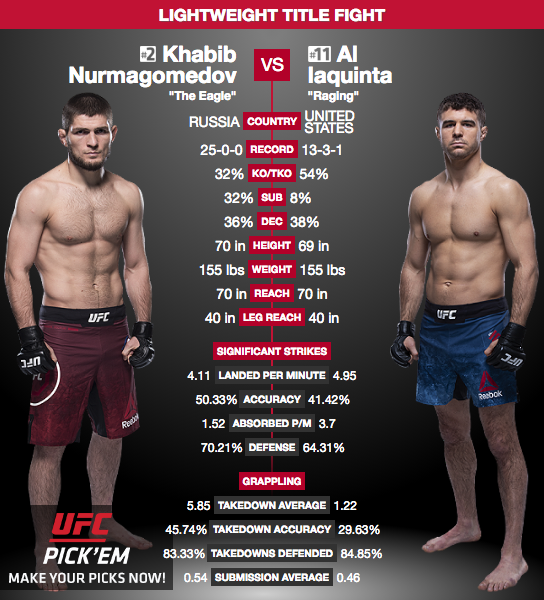 To think of what almost was… oh well.

Any chance to watch Khabib fight is a good day in my book. He is as dominating a presence as the UFC has ever seen.  Khabib is single handedly rewriting the science of ground and pound. He might even be the pioneer of GNP Science.  Sure, a lot of fighters have made their money off GNP, but none have been as physically dominating and technical as Khabib. It looks simultaneously effortless and impossible.  The pace and precision of his attacks are unmatched.

Al Iaquinta?  He has a puncher’s chance, I suppose… but then again so did most of Khabib’s opponents, and his 25-0 record would indicate that you need more than a puncher’s chance to beat this guy.  You need deadly striking. – You need a fearless approach – And you need a scary ground game…

– You need to be Tony Ferguson.

That really just happened, huh? Were my dreams really just dashed by the Boogeyman, El Cucuy? I’m not going to dedicate an entire 700 word blog post to how I feel about this, but you can basically just take all the excitement from my last post and replace it with shock and disappointment. In terms of disbelief this is right up there with finding out Jon Jones got popped again for PEDs following the second DC fight. I find myself thinking, “Is this really happening?” END_OF_DOCUMENT_TOKEN_TO_BE_REPLACED 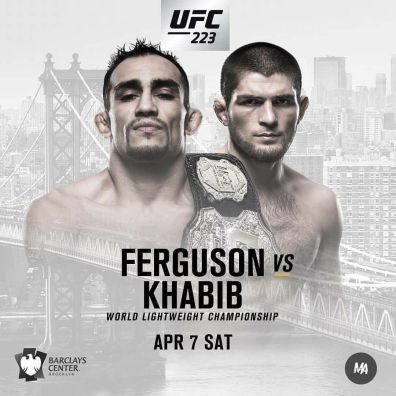 We are now just over two weeks away from the most anticipated fight of the year, and it can not have come at a better time for fans or the UFC.

Tony vs. Khabib has been near the top of everyone’s “must see” fight list since the two started making their push for the title near the end of 2016. Back then the landscape was a little different. Conor McGregor had just won the lightweight title by putting a beat-down on Eddie Alvarez and everyone was basically battling for the right to get a shot at him.  Some people still consider the timing of McGregor’s jump to boxing a reaction to the fear of defending his belt against real stiff competition like Khabib or Tony (although honestly, it may have just been the 100 Million dollars that made him do it.) Since then, Conor has all but relinquished the lightweight strap and now sits perched high upon his mountain of money, waiting to see how things unfold. END_OF_DOCUMENT_TOKEN_TO_BE_REPLACED